Growing up, I would often see and hear about the Asian mums in our community running small businesses from home, usually in catering or making clothes. With no technology, social media or massive business networks, these women had to rely on word of mouth, community events or weddings to be able to promote and provide their services.

Fast forward to 2016, and we see a very different picture now particularly for Muslim women. Despite workplace disadvantage and the ongoing battle to challenge barriers, we are also witnessing a very interesting trend – the rise of global technologically savvy Muslim female entrepreneurs, and particularly mums, who are defying the odds and smashing all preconceptions.  And there was no better evidence of this phenomenon than the Muslim Lifestyle Expo (MLE) in Manchester which I attended last weekend, along with my good friend Gemma Somauroo, a writer, Muslim home educator and one of the official bloggers for MLE. 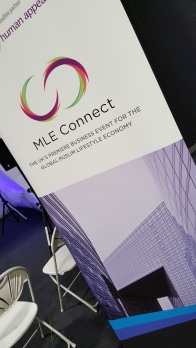 Regardless of gender, faith, race and whether you’re in business or not, there were some universal lessons for success which I took away from the event.

For those not aware, MLE is a unique event that showcases the best of global Muslim lifestyle businesses. More than 100 exhibitors from 12 different countries were promoting a fabulous range of services, products and creative talent – halal food brands, toiletries and cosmetics, modest fashion, art, Islamic finance and greeting cards and toys. The event is a reflection of a rapidly growing global Muslim consumer market, which according to official research, will be worth a staggering £2 trillion by the end of the decade.

The influence of women at this event couldn’t be missed. The founder and CEO of MLE, Tahir Mirza, stated that 60% of the exhibitors were female entrepreneurs, adding that women represent 50% of the [Muslim] start-up business community, a figure which is set to grow further over the next few years.

I attended the Empowering Muslim businesswomen panel led by a group of inspiring mums who have juggled global, and often multiple, businesses with family life. Discussions focused on how they got into self-employment, breaking from conventional careers in science, their role models, tips and skills needed to succeed in enterprise, and even the impact of Brexit on their business.

The panel (from L – R), along with chair, journalist Saba Zaman were: 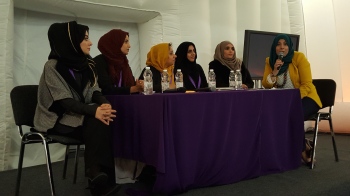 I caught up with one of the panelists, Zanib to talk about her journey into the world of writing and publishing. Zanib studied Molecular Biology at university and went on to become a science teacher. But she had always had a passion for writing and literature. It was after having her two boys, that she really noticed that often ethnic minority or other diverse characters would be linked to specific issues within books, and Zanib felt there needed to be better diversity in every day and ordinary stories in a fun and engaging manner that children could relate to. And so Sweet Apple Publishers was created, featured in CBeebies Bedtime stories and also praised in the Guardian for tackling lack of diversity in books. Her passion to promote diversity was further strengthened by the ugly racist backlash that followed the Brexit vote.

What I learnt from speaking to Zanib, and also the other panelists, are some golden lessons for success which I think are relevant for all:

A huge thanks and congratulations to the organisers and all those involved in MLE – your stories and experiences are a source of inspiration to all.